If you’re looking to improve your site speed then lazy loading is sure to help. This technique delays HTTP requests for content lower on the page so it only loads when the user scrolls down.

In turn this lowers the page’s total size which gives you a faster page load time. Anyone familiar with WordPress should know about its massive plugin library with thousands of goodies to pick from.

And in this guide I’ve curated my picks for the best lazy-load media plugins for WP sites. You’ll find simple plugins with one-click installs and more complex plugins that target videos, photo galleries, and in-page images all the same.

With the BJ Lazy Load plugin you’re in full control over how your page loads content. This can handle user comments, in-page photos, and even special media like iframes for embedded videos.

You setup the plugin right in WordPress so you control which features you want. It also doesn’t affect the user experience too much so it feels very clean.

Note this does rely on JavaScript like so many other lazy-load plugins in the WP plugins repo. This means you won’t get the same effect for visitors with JS disabled, but instead the images load inside a noscript tag.

Most WordPress users prefer this plugin because it’s easy to setup, easy to customize, and casts a wide net of support for dynamic embeds and even CDN-powered images.

For super content-heavy websites you might try the a3 Lazy Load plugin optimized for images.

This is a much newer plugin and gets frequent updates from developers. It was created for broad mobile support for websites that run hundreds or thousands of images on a page.

It’s actually built on the Lazy load XT jQuery plugin which is a long-time trusted resource. Combining this into WordPress doesn’t take much effort.

Another nice thing about the a3 plugin is how you can choose which element(s) run lazy loaded content. You can choose between images on posts, pages, and whether to apply lazy loading to comments & avatars.

For a lightning fast pageload try the free Lazy Load XT plugin, one of the smallest lazy loading plugins you can find for WordPress.

It’s not something that gets many updates and it’s currently released under v0.5 without any new updates in two years. So pretty unlikely we’ll see any changes to this plugin over time.

But it sits in the WordPress repo with a 90%+ five-star rating and plenty of great reviews.

It also relies on the jQuery Lazy Load XT so it’s basically a port of the original plugin. Yet this is a tad lighter and comes with fewer features, so I recommend this more for lighter WP installs where you don’t want plugins to slow down your workflow.

Developer Mohammad Jangda released this lazy load plugin as one additional resource for WordPress users. It’s built on code released from the WordPress team a few years back.

This simple plugin relies on jQuery Sonar to detect when an element is viewable on the page. It uses this library to run Ajax calls for the images to reduce page size and load times.

Again this doesn’t have too many options which can feel a bit limiting.

But it’s also a reasonable choice for anyone who wants to keep their WordPress website light & breezy.

Here’s one other example of a super light plugin totaling only 5KB in filesize. With Speed Up – Lazy Load you get all the default features of delayed image loading and JS-based browser detection for whenever the user scrolls down the page.

But this plugin is also updated more frequently than others. The last update was about 6 months prior to writing this post and it’s been tested up to WordPress v4.7.6(current version is 4.8.2).

Speed Up is your typical set it & forget it plugin. You just install it and let it run in the background, no settings required.

And for 5KB filesize you really can’t ask for anything smaller. 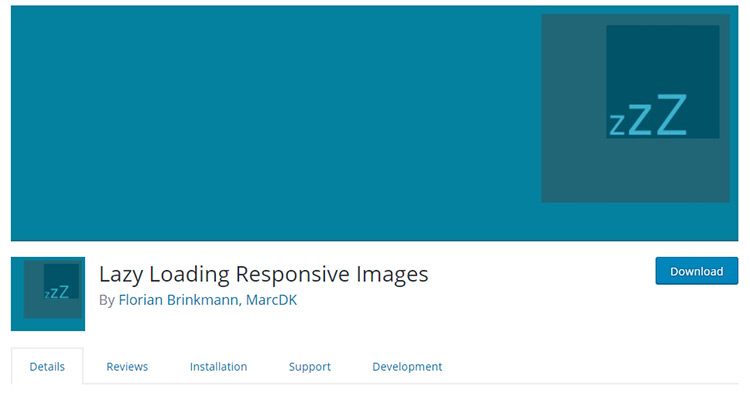 Now for something with a bit more customization check out Lazy Loading Responsive Images. This was built as a resource for handling responsive content with lazy load scripts on all devices.

Note it does require JavaScript much like every other plugin, but it also uses the <noscript> tag as a fallback. It still loads images just as you’d expect and it uses responsive placeholders until the user scrolls down further on the page.

And you’ll notice this plugin still gets frequent updates with the latest being 2 weeks ago. So it’s a trustworthy resource that’s likely to be usable for years to come.

While this isn’t technically just a lazy loading plugin, it does include the lazy load functionality.

JCH Optimize is really one massive pack of features that help speed up your page load times. You can install this plugin on any WordPress site and immediately notice the benefits.

The lazy load feature is buried inside the settings page and it’s just a one-click setup. So this plugin is a great choice for speeding up your site with more than just lazy loading.

But it’s not a complete resource and you’ll still need other things like a caching plugin alongside JCH Optimize.

This plugin was just released a couple months prior to writing this post so it’s one of the newest plugins out there. And if you grab a copy it’ll come with 6 months of support to help you get it setup & solve any issues along the way.

But for features this lets you target many page elements:

Take a peek at the main plugin page and see what you think. It’s the only premium plugin I recommend in a sea of free alternatives.

Looking for a way to just lazy load embedded videos? Then Lazy Load for Videos is your best bet.

This plugin is useful in two specific ways: to help webmasters lazy load embedded videos without touching images, or to use along with another lazy load plugin.

One reason this stands is that it keeps placeholder images for videos before loading. So it’ll pull thumbnail images from videos to keep the aspect ratio in-tact. Plus it lets you customize the player embeds with certain controls or annotations.

Check out the GitHub repo if you wanna learn more about this plugin, or if you wanna contribute something to the project.

Naturally this plugin targets all images on the page and embedded media in iframes. But it’s also great for targeting CSS background images if you want those assets to lazy load too.

And it works on the HTML5 video element so you can even lazy load your own embedded videos. Pretty cool!

Other options let you specify the animation styles, the threshold for loading content, and certain classes you can use to remove the lazy load functionality.

Not many WP users know about Crazy Lazy because it doesn’t appear at the top of the search results for lazy load plugins. But this one is an excellent choice for its light size and its careful choice in jQuery plugins.

Crazy Lazy uses one of two very popular jQuery plugins: either the Unveil.js script for more dynamic themes or the Lazyload.js for smaller themes.

It gives you full control over the CSS and you can style default images to appear any way you like(before loading). Plus you can add the data attribute data-crazy-lazy into your code to exclude certain images from lazy load effect.

Perhaps not the flashiest plugin you can use but it’s a smart choice with a small yet stable codebase.

Out of all these options there’s got to be something here to make your images lazy. And with WordPress plugins you can setup anything in a couple mouse clicks.

Take another look over this list and see what stands out. You can always test a few of these plugins to see which one you like best. And you can run performance tests on your WP server to see which plugins really are the fastest.