Looking for affordable WordPress hosting for your next site? A2 Hosting offers some surprisingly fast performance at a similarly surprising low price.

If you’re in the market for budget hosting that doesn’t feel like budget hosting when you run it through speed tests, you should keep reading my A2 Hosting review to learn more about A2 Hosting’s features, as well as to get a peek at the real-world tests that I ran.

A Brief Intro to A2 Hosting

Originally launched in 2001 under a different name, A2 Hosting is located in Ann Arbor, Michigan (hence the A2 name). That’s all nice enough – but the most interesting thing about A2 Hosting is this:

A2 Hosting, on the other hand, is independent. In my opinion, that’s a major plus because EIG’s reputation is…well, let’s just say it’s a bit less than sterling.

Don’t worry – I’m going to run real-world tests and dig into all of these features in more depth in the next sections. But to start off, I just want to give you a quick peek at everything you get with A2 Hosting’s affordable shared plans.

While it’s not managed WordPress hosting, it is a solid feature list for the money. For example, with the exception of a few hosts, most budget hosts don’t give you PHP 7.X or HTTP/2, both of which offer performance improvements over the older technologies used by many others.

Next, let’s dive into A2 Hosting’s performance in some real-world tests…

No matter how great a host’s feature list looks, it doesn’t really mean much if the performance isn’t there. So…let’s start with performance. I’ll run A2 Hosting through a few Pingdom tests from different data centers as well as a Load Impact test to see how it performs under pressure.

Note – because I’m using an unoptimized Divi template, A2 Hosting doesn’t have the easiest job here. Many reviewers test using what are essentially blank WordPress installs (which makes it easy for pretty much any host to appear to load fast). This install is far from blank. Keep that in mind as you look at the testing data.

For my Dallas, Texas test, my test site loaded in 1.15 seconds. For a test page with 851 kB and 78 external requests, I’d say that’s pretty speedy:

The Pingdom test from San Jose, California was pretty similar. This time, my site loaded in 1.25 seconds. Not much difference!

And finally, let’s put the test site through some stress testing with a scenario from Load Impact. Unlike the first tests that are based on a single visitor, Load Impact uses 25 different virtual users over 5 minutes to see if a site’s performance holds up as traffic increases.

For reference, I ran my Load Impact test with a load zone in Columbus, Ohio. Here are the results:

Other than that small spike at the beginning, my test site performed well as the number of users increased. That is, the green line (load time) stays flat as the blue line (number of users) increases.

Again, considering my test site was close to 1MB and had 78 requests, I’d say A2 Hosting did a great job sticking around the one second mark in my Pingdom tests. And the Load Impact test showed no performance loss under pressure.

Hands-on With A2 Hosting Interface

Alright, so you saw how A2 Hosting performs in the real world. But how about the rest of the features?

A2 Hosting uses cPanel for its backend which is fairly standard for budget hosts – but it also means there’s not anything super exciting to see in the backend interface.

I’ll give you a quick run-through and try to highlight some of the unique features. But for the most part, you know exactly what you’re getting if you’ve ever used cPanel before.

The Backup Wizard is a nice touch for letting you run manual backups and/or restores:

You also get access to Server Rewind, which you won’t find at a lot of shared hosts. This allows you to drill down and restore individual files if needed: 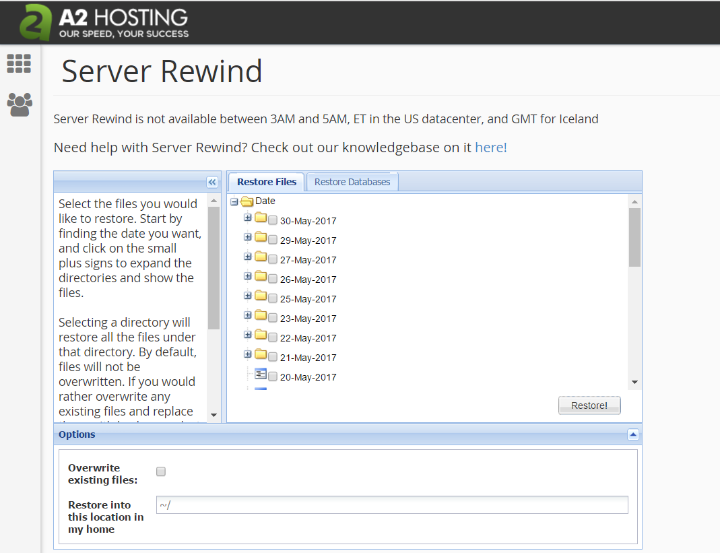 And the A2 Optimized tab lets you configure server side caching, SSL, and some other optimization details from your cPanel dashboard: 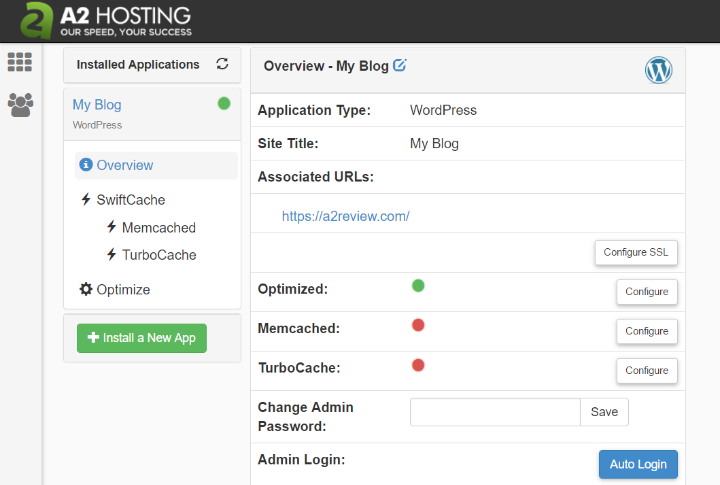 All in all, it’s cPanel…but with some helpful added goodies that you won’t find at very many shared hosts.

How Much Does A2 Hosting Cost?

In the previous two sections, I’ve shown you that A2 Hosting has stellar performance and a solid feature list (though it’s not managed WordPress hosting). But how much do those features and performance cost? Surprisingly little, actually. 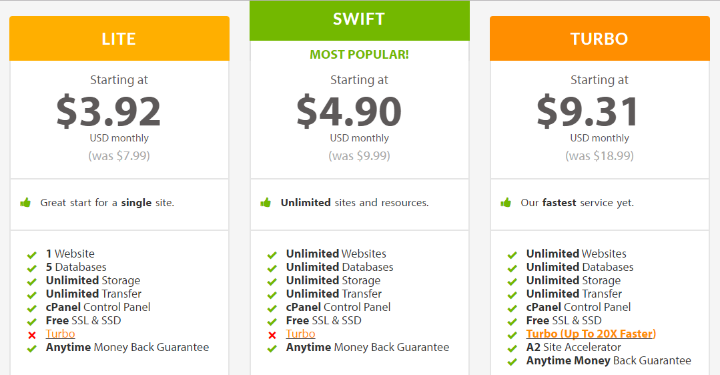 A2 Hosting’s cheapest plan, LITE, starts at just $3.92 with promotional pricing (starts at $7.99 thereafter depending on how many months you pay at a time). That’s good for one website, five databases, and unlimited transfer.

A2 Hosting’s SWIFT plan ups that to unlimited sites and databases, as well as all the other features in LITE. For that, you’ll pay $4.90 promotional and $9.99 regular.

And finally, the TURBO plan gets you more power for higher performance, as well as all of the other features in SWIFT. It costs $9.31 with promotional pricing and $18.99 with regular pricing.

Should You Go With A2 Hosting?

I’ve personally tested a number of WordPress hosts at this point and the two top-performing hosts in this price range are almost always:

Between the two, A2 Hosting is a bit cheaper, while SiteGround includes some extra managed WordPress features like automatic updates + more (depending on your plan).

If you want the absolute best performance at the absolute lowest cost, then A2 Hosting is the winner. If the lack of managed WordPress hosting functionality is a deal breaker, then you might want to go with something like SiteGround instead.

Go to A2 Hosting

And if you’re looking for cheap managed WordPress hosting instead, you might want to check out our SiteGround review or DreamPress from DreamHost.

Colin Newcomer is a WordPress writer for WPKube. He uses WordPress more often than any sane person should.

1How to Start a WordPress Blog (Step by Step Guide)
2How to Install WordPress - The Complete Guide
38 Best Options for Managed WordPress Hosting Compared
4The 6 Best WordPress Hosting Providers for 2021 Compared
5Top 9 Landing Page Plugins for WordPress (2021)
69 Best List Building Plugins for WordPress In 2021
7How to Fix the 500 Internal Server Error on Your WordPress Website
8Beaver Builder Review: Is it The Best Page Builder Plugin for WordPress (2021)?
9What is a Gravatar and Why You Should Get One
10Thrive Themes Review: A Look At The Full Membership
117 Best WordPress Migration Plugins Reviewed and Compared for 2021
12OptimizePress Review: Create Landing Pages with Ease
13How to Make a Website: Complete Beginner’s Guide
14WordPress.com vs WordPress.org: Which is Best for Me?
15Top 22 Best Free Stock Photo Resources For Your Site
1617 of the Best Google Fonts for 2021 (And How to Use Them in WordPress)
17LifterLMS Review: Is it The Ultimate WordPress LMS Plugin?
18How To Fix ‘503 Service Unavailable’ WordPress Error
1911 Best Contact Form Plugins for WordPress in 2021
20How to Use BackupBuddy – The Best Backup Solution for WP??
21How to Add a Custom Logo to Your WordPress Site
22Kinsta Review: Real Test Data + My Likes And Dislikes
23How to Fix Error Establishing a Database Connection in WordPress
24Thrive Architect Review – Best Landing Page Plugin for WordPress!