WordPress is most certainly the world’s favorite content management system (CMS). It powers over 70 million websites, which makes a whooping 60% of all websites that run on a CMS. This figure translates to about 25% of all websites on the planet!

Travel back in time twelve years, and this wasn’t the case. WordPress was a bare blogging platform that showed little promise, and were it not for the passionate guys and girls behind the platform, it would have probably shriveled and died.

It has grown in leaps and bounds, and today, the WordPress you see is nothing like what we had in 2003. Today’s post is a look back at the events and people that made WordPress the darling CMS of many a webmaster.

But first a few fun facts…

There are more than 280 CMS platforms

Did you know there are more than 280 content management systems out there? A few examples include Drupal, Joomla and Magento. Some are free, others are commercial packages.

WordPress beats them all hands down in terms of functionality, price and usability. It powers some of the most popular sites on the planet including Time.com, Bitly.com, ViralNova.com, Texas.gov and many more.

The philosophy behind WordPress was and still is to build an elegant and well-architectured publishing platform that would add ease to personal web publishing. It’s primarily built on PHP and MySQL and licensed under the General Public License (GPL).

WordPress is a Fork

WordPress is a what? In programming circles, a fork is simply an independent piece of software that’s built with source code derived from another software. Does that make sense? Here’s a clearer definition of a fork from Wikipedia.

What began as a simple blogging platform is today a fully-fledged CMS loved by millions all over the world. And that’s mainly because you can easily use WordPress to build any site imaginable. You can create social networks, ecommerce portals, communities, membership sites, personal blogs, portfolios, business sites, education sites and pretty much anything else you can imagine.

Say what? Yes it is. You don’t shell out a single cent for the WordPress software. You will, however, pay for web hosting and domain name to have your WordPress-powered site on the web.

You can Make Money with WordPress

You can be anything with WordPress. Blogger, web developer, artist, consultant, support specialist, work at home mom, business person, reviewer, marketer – anything! All these are lucrative opportunities.

All WordPress versions are named for Jazz greats.

Fun facts aside, let’s get back to our history lesson.

January 24, 2003 – Matt Mullenweg is a troubled man. He has been tirelessly working on his website, growing readership and stuff, but there’s a big problem; his b2/cafelog logging software hasn’t been updated for months, and Michel Valdrighi – the main developer behind b2 – is nowhere to be seen.

What to do? Matt decides to create his own version of b2/cafelog since the latter was GPL. What this means is he could use b2’s source code however he wanted. Here’s an excerpt from The blogging Software Dilemma post that set WordPress in motion:

Fortunately, b2/cafelog is GPL, which means that I could use the existing codebase to create a fork, integrating all the cool stuff that Michel would be working on right now if only he was around…

One statement later, he added:

I’ve decided that this [is] the course of action I’d like to go in, now all I need is a name.

The next day, at about 4PM, Matt’s post received a reply from one Mike Little. He expressed his interest in contributing to the fork. He further recommended posting the idea to the b2 forums in a bid to attract more contributors.

April 1st, 2003 – With the help of Mike Little, Matt forks b2/cafelog and stores the project on SourceForge. Christine Tremoulet, Matt’s friend, makes an appearance here. If you don’t know who Christine is, she is the brains behind the WordPress tag. The team of three didn’t hesitate to adopt the name WordPress.

Matt immediately went to work, dedicating most of his time and efforts to standardizing the code. Remember the goal was to create an elegant and well-structured personal publishing system. If this was to become a reality, the platform had to be elegant from the ground up; from inside out. For this reason, Matt threw his back behind XHTML strict compliance and semantic code.

A couple of weeks later, Mike made his first commit, which contained the excerpt feature. Around the same time, Matt introduced the WP-Texturize feature.

With their progress, Matt felt it would be wise to have a dedicated online hub where users and developers can congregate to develop WordPress further. This led to the creation and launching of WordPress.org the same month. 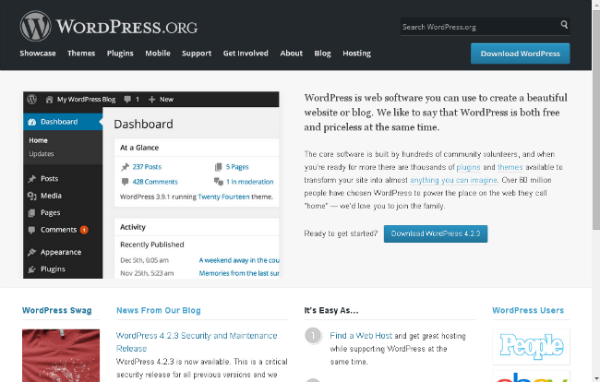 From the word go, WordPress.org had a development blog, documentation, and support forums. Even though the design has changed significantly, WordPress.org still carries most of its original core features.

Matt and Mike were now getting in the thick of it, making commit after commit. These initial commits brought features such as much needed changes to the admin panel and an easy installation procedure, among others. All the same, much of Mike’s and Matt’s early work revolved around cleaning up and tweaking Michel’s b2 code.

May 23, 2003 – Michel “resurfaces” and makes WordPress the official branch (successor) of b2. This was decision was arrived at a time when several other developers started to fork b2.

This announcement gave Matt the impetus he needed to move forward, and sure enough, he released WordPress 0.7 on May 27, 2003.

With this version, users were treated to the famous WordPress Links manager allowing bloggers to create blogrolls. Other features included Texturize, a new admin area, manual excerpts, new default templates and updates to the code.

Things started looking up after 0.7 hit the internet, even though WordPress was severely handicapped in terms of functionality compared to the flavor we have today. Donncha O Caoimh, one of the developers who forked b2 to create b2++, joined hands with Matt and Mike raising the number of developers to three.

September, 2003 – Dougal Campbell and Alex King join Matt and company. Dougal made his first commit enhancing the RSS feeds, which made WordPress faster.

December, 2003 – The support forums launched by Matt seven months earlier were on fire. WordPress was growing in popularity creating the need for full official documentation. This lead to the birth of WordPress Wiki, which was built on MediaWiki. Later, the wiki was renamed “Codex” based on suggestions by Monkinetic.

In the same month, Alex King – in a blog post titled “The Great Renaming” – revealed that Matt had just finished renaming “b2” files to “wp-” defeating “… the view that WordPress was just b2 with some added hacks.”

Late in 2003, Ryan Boren jumped on the WordPress bandwagon, bringing with himself the revered WordPress plugin system.

On the third day of January, 2004, WordPress 1.0 launched. Seeing it was a major release, it shipped with a ton of great features such as search engine friendly permalinks, major admin UI modifications, a faster posting interface, additional template tags, Atom support, comment moderation and multiple categories among others.

WordPress had more than 19,000 downloads, thanks to a price restructuring price that backfired on rival company Six Part, the guys behind Movable Type, yet another CMS.

October, 2004 – Matt drops out of college to take a job at CNET, where his core duties revolved around building and managing his employer’s blogs.

This release came after a “soft launch” three days earlier revealed some infrastructure issues. Regardless, the soft launch had garnered over 12,000 downloads in a record three days. This version focussed heavily on user-experience. As such, the theme infrastructure, an improved user interface and static pages were introduced.

Common site elements such headers, sidebars and footers were broken into their own files to improve site customization.

Major improvements are made to the writing interface. WYSIWYG editor is introduced by Andy Skelton and the TinyMCE team. Two months earlier, in the month of October, Matt had created the awesome Akismet plugin.

This anti-spam plugin made an appearance in WordPress 2.0, alongside Skippy’s DB Backup. Akismet has always been bundled with WordPress ever since. Other features included user roles, streamlined importing, enhancement to the post screen and header customization among others.

2006 cames and passed without much fanfare as there weren’t any major releases. However, venture capitalists and other investors were turning their attention towards Matt and Automattic, the company he had created soon after leaving CNET in October 2005.

August 2006, the first ever WordCamp is held in San Francisco. If you’re still wet behind the ears, WordCamps are annual events that bring WordPress users and developers together. As you’d guess, all topics revolve around WordPress.

You can now switch between the WYSIWYG and the text editors, and the autosave feature couldn’t have come at a better time. You can also hide your blog from search engines, set any page to be your front page, and import/export content seamlessly.

The login screen gets a complete facelift, and the upload manager makes it easy to manage all media.

Open your hands wide world, and welcome new features such as widgets, better speeds, Atom feeds and infinite comments among other features. WordPress has more than 1.4 million downloads. Could this be the result of the media coverage WordPress was pulling? Or was WordPress just awesome?

Named for the great tenor saxophonist Dexter Gordon, version 2.3 came with some cool features both for users and developers. User features included native tagging support, update notifications, canonical URLs, pending review feature, and a much much improved WYSIWYG editor. The developers were treated to full Atom 1.0 support, improved jQuery that was 800% faster, a great taxonomy system, and $wpdb ->prepare() SQL queries among others.

Things were really looking up for Matt, Automatic, and the entire WordPress community. And in November the same year, Automattic acquired Gravatar, adding oomph to comments.

By now, WordPress has been accepted as a fully-fledged CMS, not just a run of the mill blogging platform. WordPress 2.6 allowed users to post from wherever on the web using the Press This! feature, as well as track changes to posts and pages using the Post Revisions feature. Other features included image captions, word count, theme preview, customizable avatars and bulk management of plugins just to mention a few.

Let’s take a breather here today, our time machine needs refuelling, and we have to stock up on supplies. We could use a mechanic as well…

In part two of this series, we shall cover the rest of the history lesson, and make future projections. We will also see how the WordPress UI has transformed from 2008 onwards. Stay tuned!